88 years young today! My what a good age that is. My what great health you have. My what a big family you have. 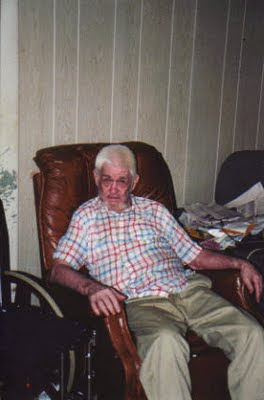 He is the oldest of 10 children. He has 4 children: Cheryl, Peggy, Me, and Travis. 6 grandkids, and extended family in the grandkids spouses and grandchildren.
He likes politics (local, state, and federal). He keeps up with all the news. He reads his Bible daily. And he has no end to entertainment from the kids and grandkids in and out. Sometimes he can have a pretty hectic day. Also a granddaughter has the same birthday, Happy Birthday Aimee'.

(me on the right in white) 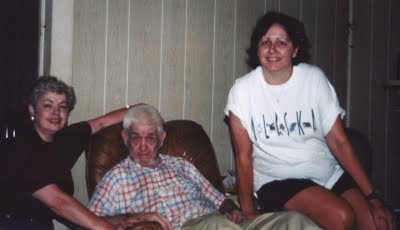 Have found nothing at yard sales,or estate sales, or at the downtown shops lately. But I did find this cutie pie when I got to work one morning recently. 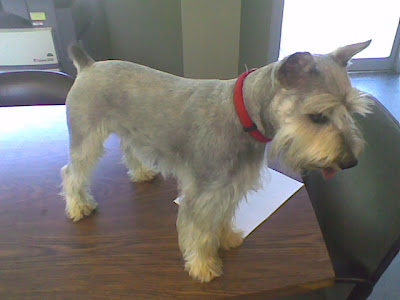 He was dodging traffic in and out of the street. So I rescued him. He was very friendly. I brought him inside, gave him water, took a picture of him and posted a sign outside hoping to find his owner. One co-worker told me if I would just open the door he would probably run home. But I couldn't let him back out in the traffic.

Several hours passed and I still had the dog. And to make things more difficult, the building air conditioner had been broken all week. So there was only a fan blowing hot air. This was during the last few weeks when it was 101 degrees. So it was hot, stuffy, and uncomfortable. I would have to take him home with me for the night if I was not successful in finding his owner.

One customer came in and saw the dog and knew I was looking for its owner. About 30 minutes later this older gentleman came walking in and said he heard I had his dog. He had been out walking the streets looking for his dog and just so happened to ask the customer who had been in earlier and she told him we had found a dog.

A happy ending to my story. The dogs name is Drover. The people had just moved in this area and Drover was not settling in very well. I could see their house from our building. I guess that's why Drover kept going to the door and looking across the street. Maybe I should have opened the door and let him run home.