The Last Two Days of Vacation

The weather is gorgeous. So is the scenery. We're spending the last two days of vacation in camping mode to enjoy a slower pace than the hustle of being in tourist mode.

We've been at Bear Cove Village RV Resort for a week now. It's one of the prettiest settings of RV Resorts we've passed in our surroundings all week. Nestled in a valley right off the main attractions with the Trolley Station within walking distance.

So we've taken a few hikes on the nearby trails from our home base. They were short and dog friendly for a hike with the Poochie Dog.

I took advantage of the camp Resort laundry facilities to do the laundry from the first part of the week.

The front office has a wonderful store/souvenir shop that I took advantage of.

And then on the last day, a new camper couple pulled in across from us. And what do you know? The guys went to high school together and we now live about 20 miles apart. We sat outside late in the evening and chit-chatted. Small world for sure.

It's day four in the Smokey Mountains.  Every day so far we've hit one of the major strips of the area in tourist fashion by trolley with all the other thousands of tourists here.
But today we took the slow way around and drove thru Wears Valley. It's actually a street off the main Parkway that leads to a beautiful drive thru the mountains.
It's a country setting with farms and fields  of hay with mountains behind. 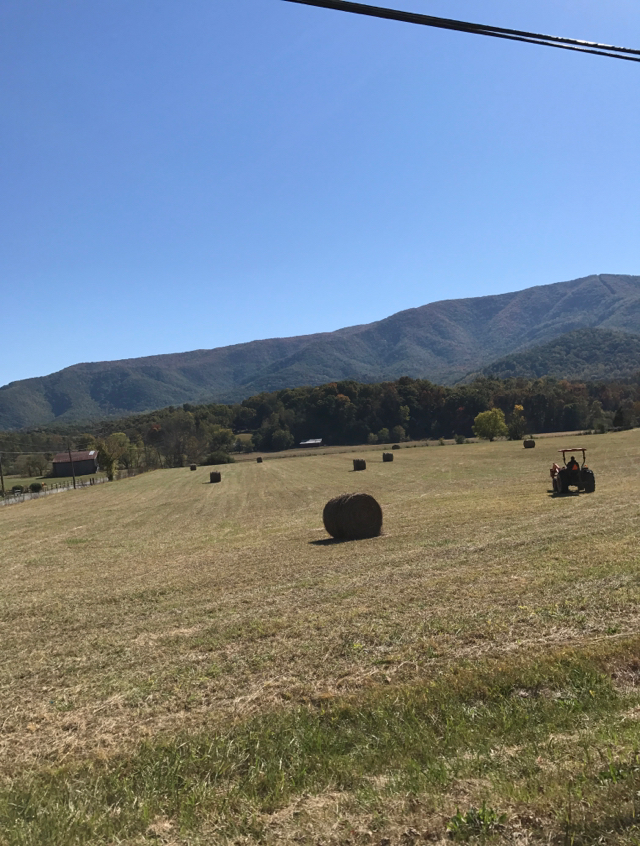 All along for miles are hay bales lined in a row that gives the perfect look to the fall October fest season. 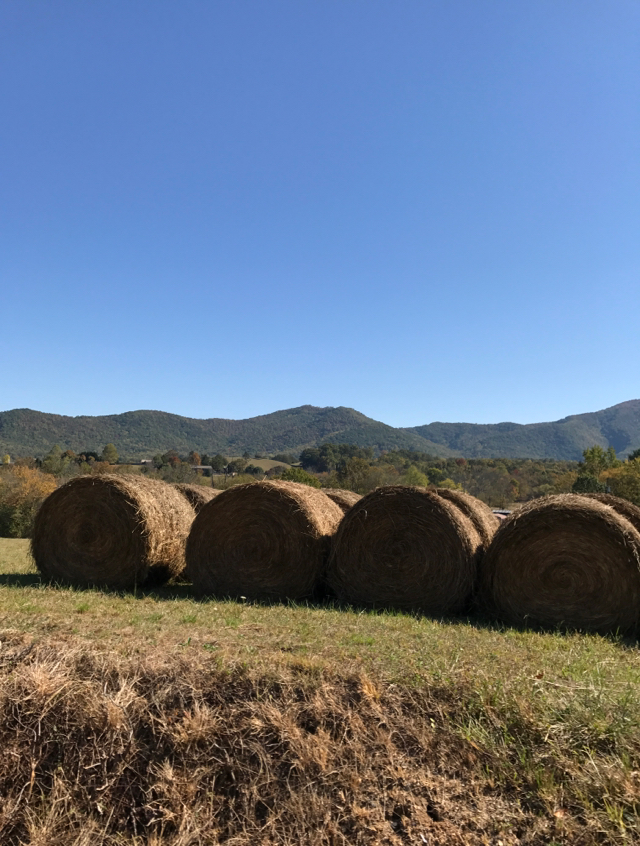 Even tho it was a country mountain drive there were quite a few country stops to make. We stopped at Moonshine Ridge Country Store and Cafe to browse around and get a drink. 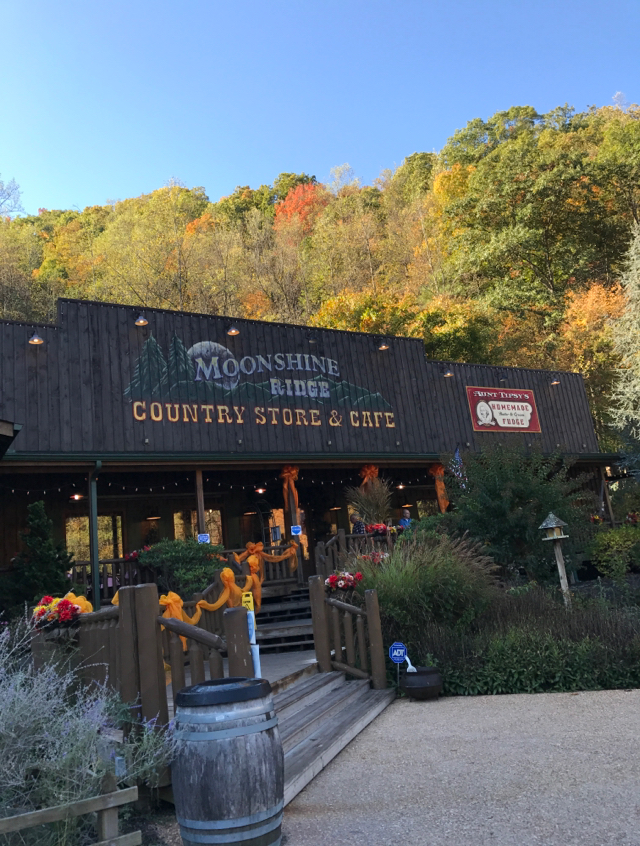 The drive was beautiful on a two lane road winding around the mountains and even hairpin curves.
It was a bear siteing kind of a day. No real bear siteings. Only man made bears.
I loved this one made out of hay bales decorating the front of another country store. 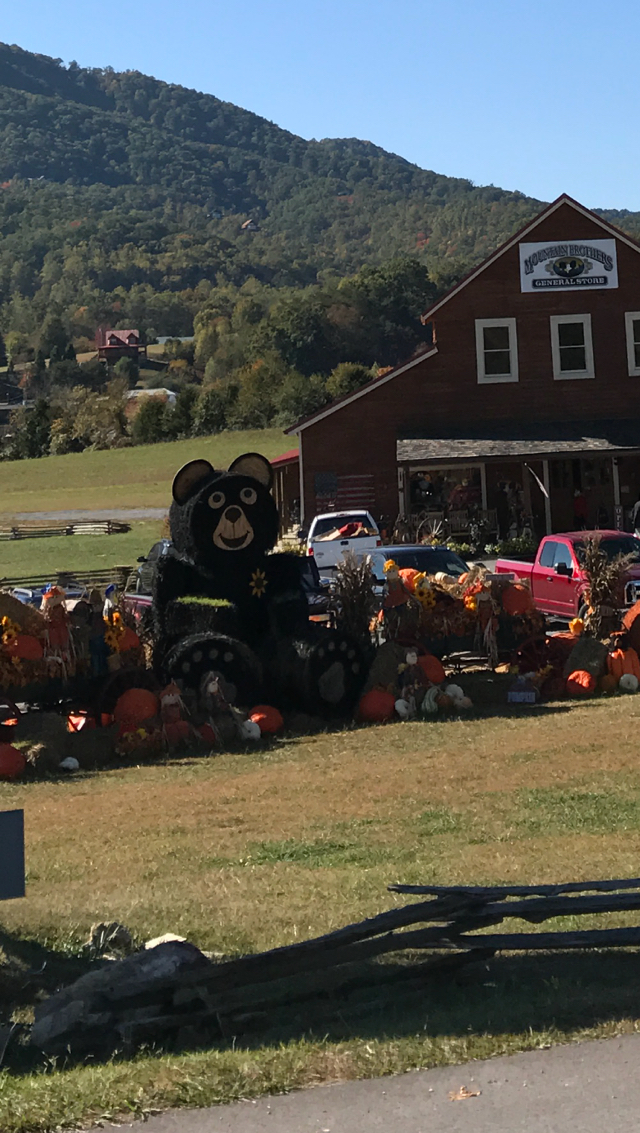 And even the tinyest of bears found. 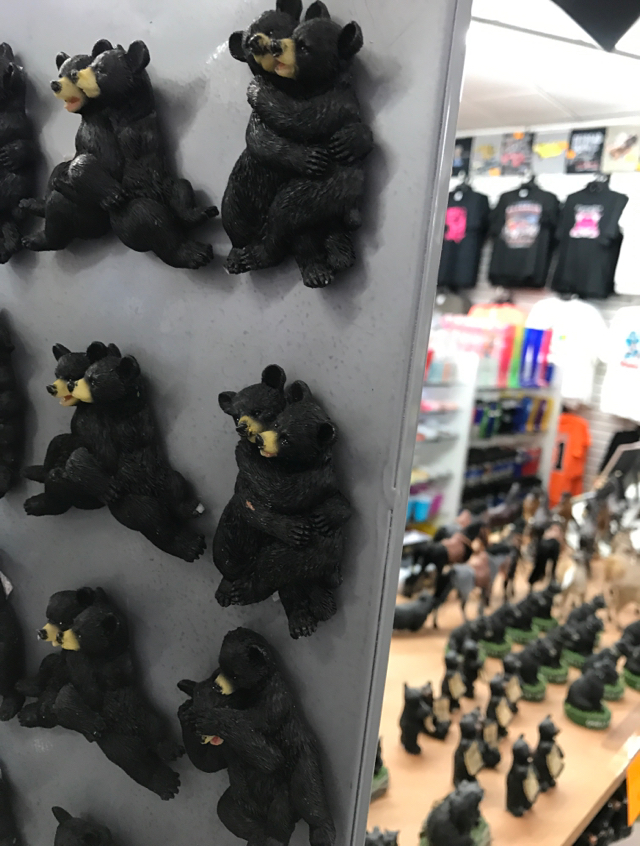 Then back to camp after an all day ride to take care of the Poochie Dog. 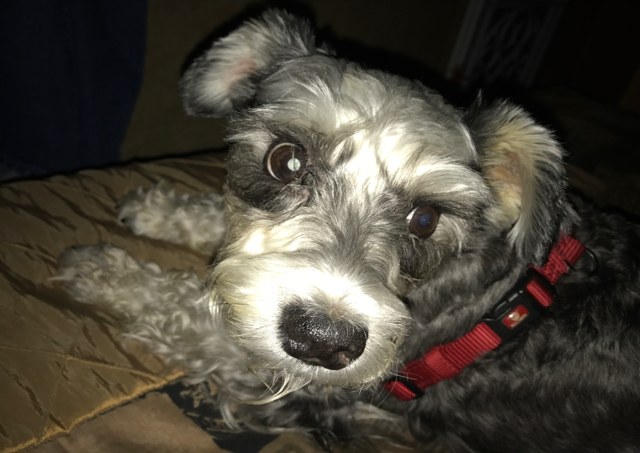 The Day In Gatlinburg

It was a beautiful day to be out all day.
We rode the trolley into Gatlinburg. The strip is loaded with shops and eating places and people everywhere. 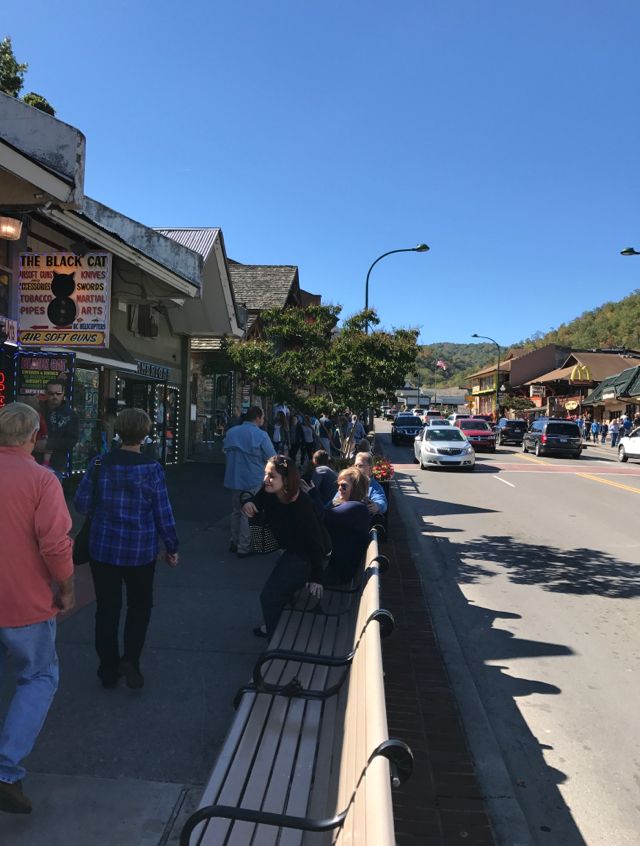 We committed to do only one paid attraction. Since there is plenty to see and do and walk and shop.
The Ripley's Aquarium of the Smokies made it to the top of our list. And it did not disappoint. 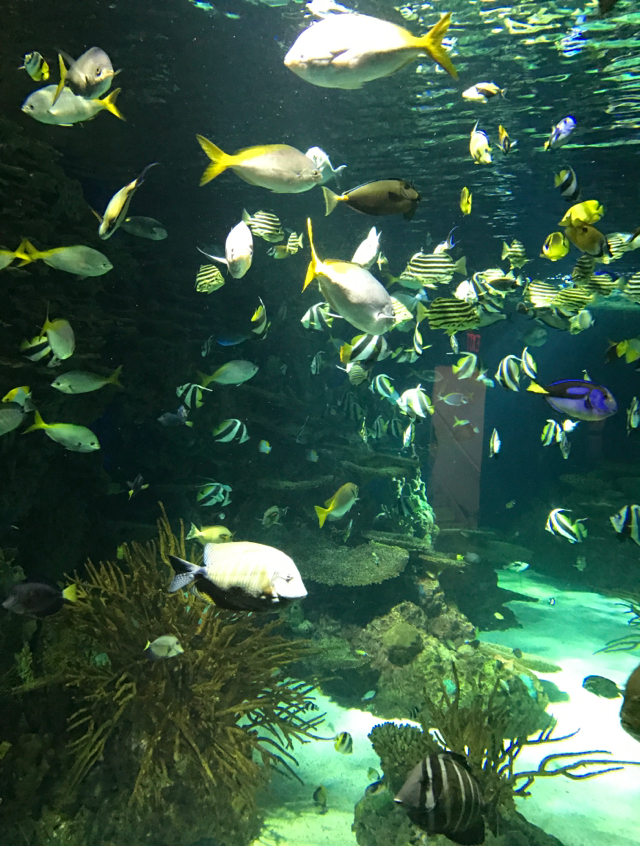 My favorite was the under water tunnel
thru the shark tank. 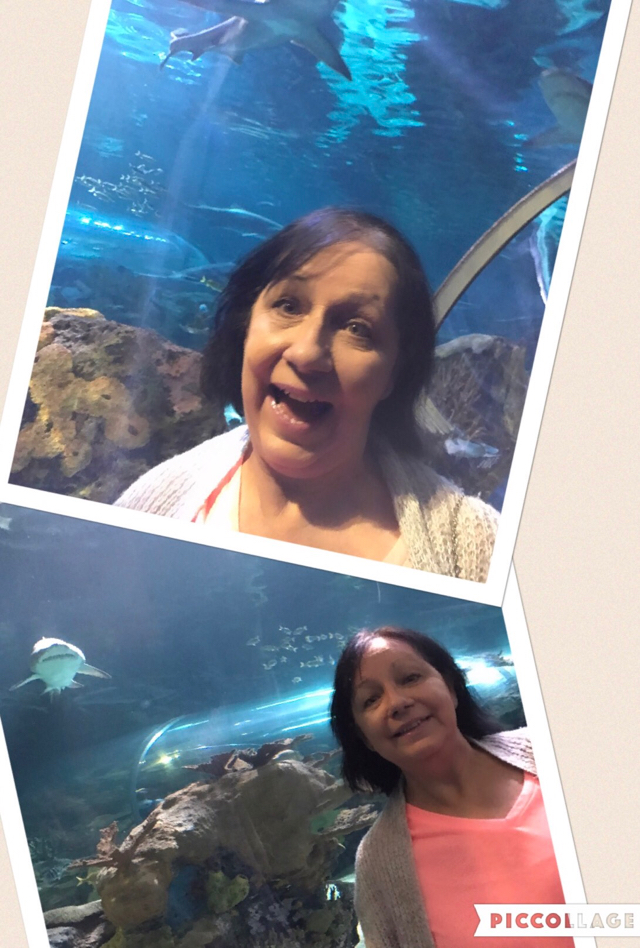 I could have stayed in that section for a longer time. But we stood on a conveyor belt type thing that slowly carried you thru the tunnel then on to all the exhibits in the Aquarium. 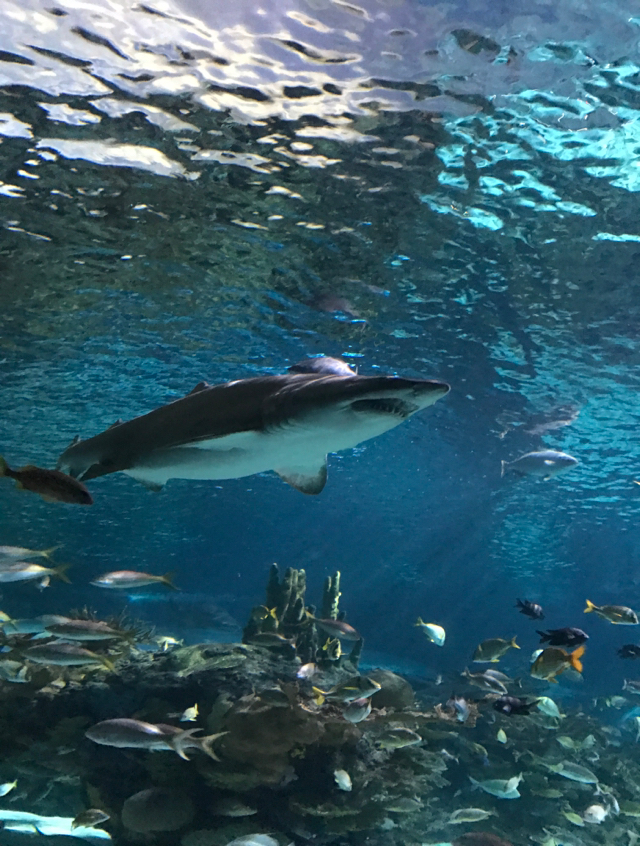 The trolley station in the Old Mill District in Pigeon Forge is about a 10 minute walk from our campsite at Bear Cove Village RV Resort. We take The trolley for our second day and go to Dollywood. 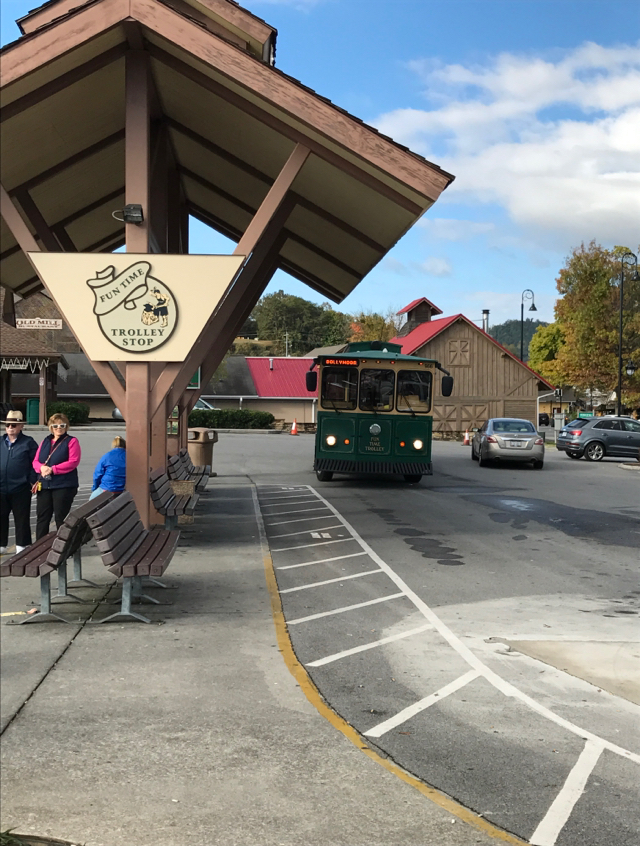 We've been here oh about 20 years ago. Same sign as I remember from then. Deja vu. 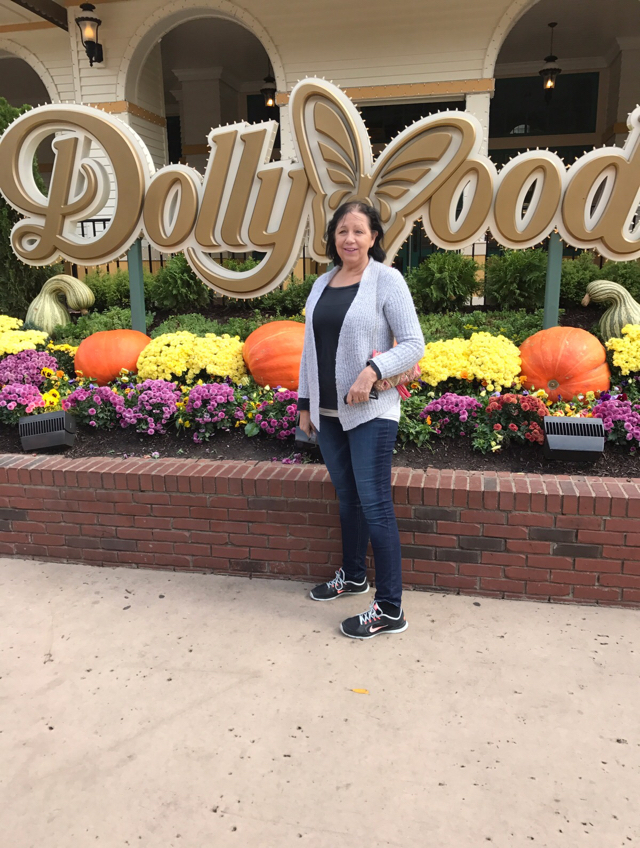 The little chapel still the same as I remember. 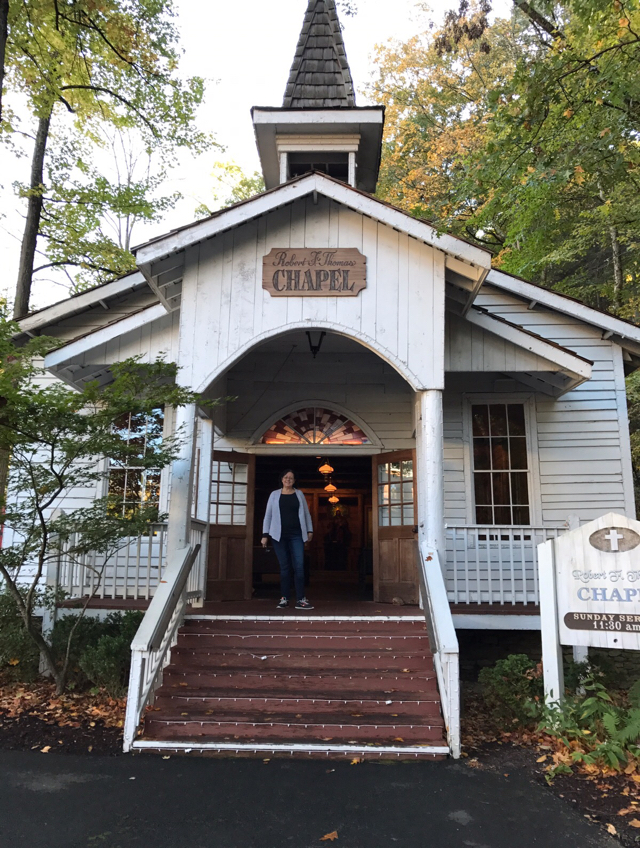 We walked all around. Looked at everything. Went in all the shops Watched the craftsmen. Umm, if only I had a lot of spare money. 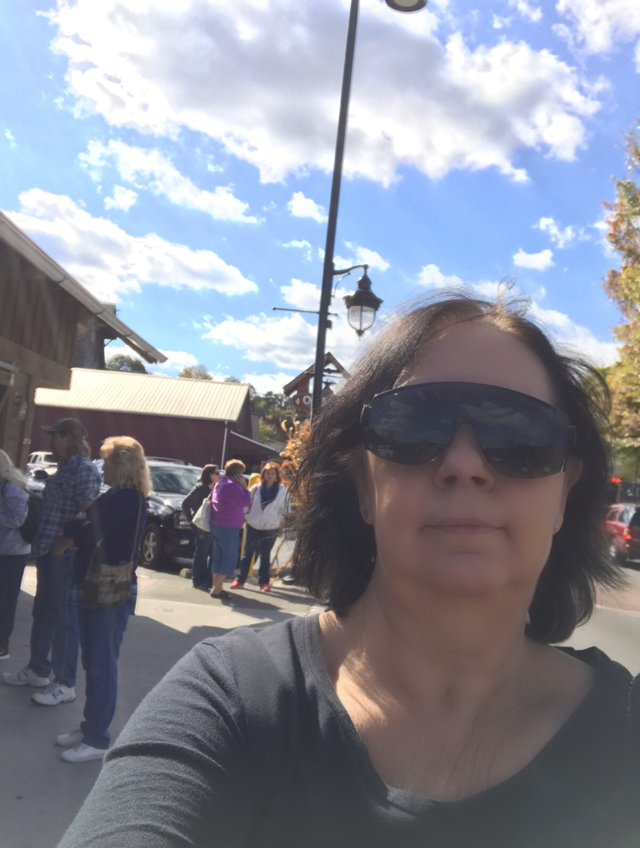 After lunch, we walked and looked some more. Took the trolley back to our home base cause there was Poochie Dog waiting for our return. I took her for a walk that evening and took her picture with the bears, that she did not like. 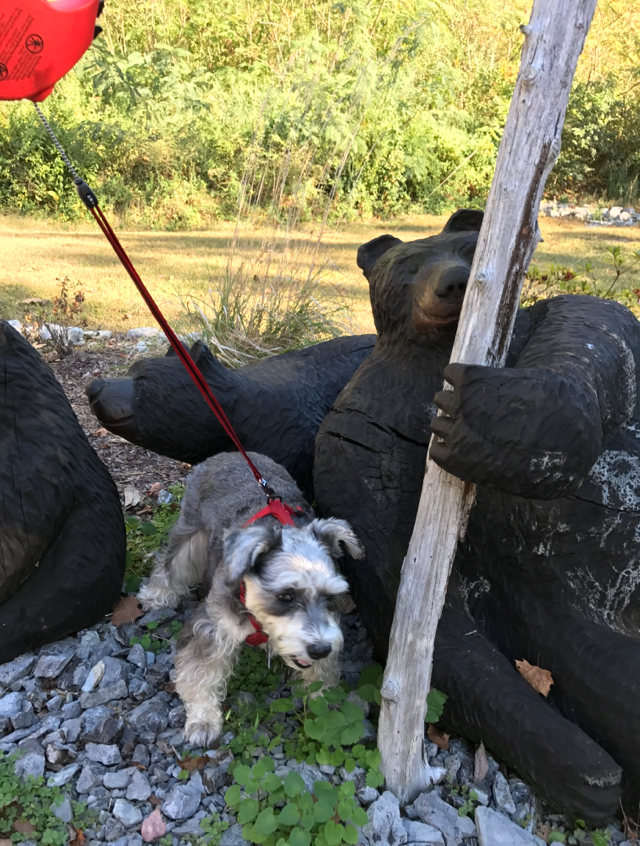 Tripping in the RV

We're on a vacation/road trip/anniversary celebration/Halloween holiday. Call it what you like. As retirees we can vacation anytime. And make it a road trip near or far. This makes forty-two years of wedded bliss. And it's almost halloween, kind of a holiday. 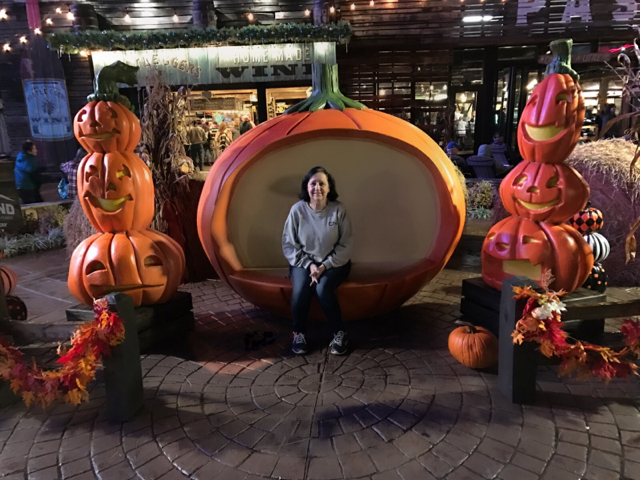 We're tripping to Pigeon Forge in the RV. 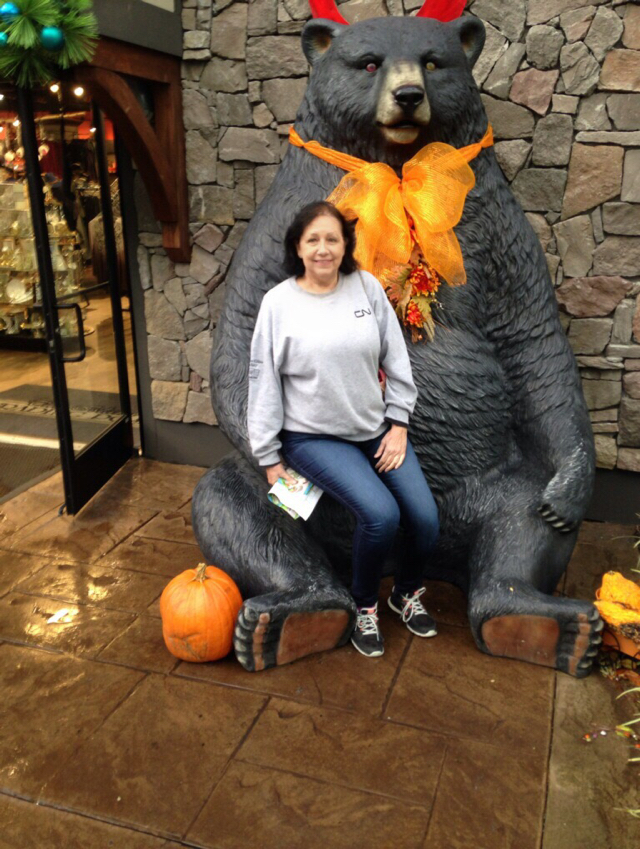 Arriving on a Friday and getting set up in Bear Cove RV Resort found the temperature dropping and clouds in the sky. We took the trolley to The Island at Pigeon Forge.
It's an attraction of food, shop, and play. That's what we did. The Smokey Mountain Wheel was the center attraction. 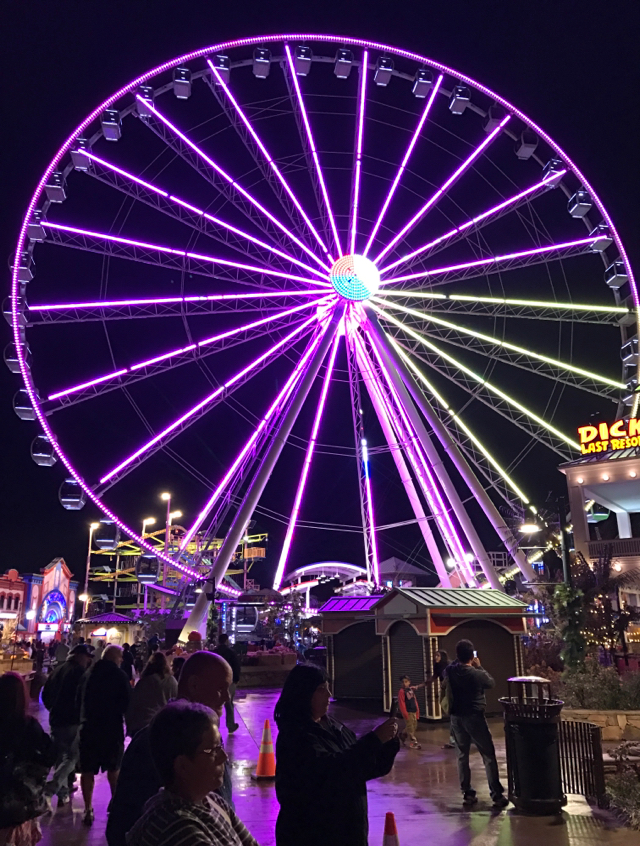 It continuously changes colors in different  color patterns. Each gondola is glass enclosed and temperature controlled ride. I rode it all alone. But it's pretty. 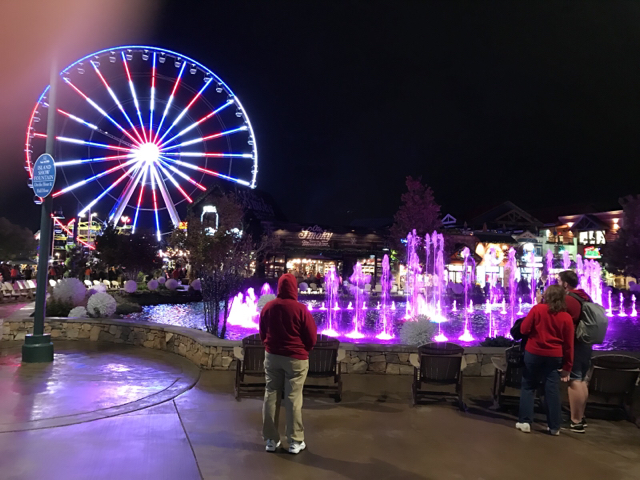 My view from the ride. 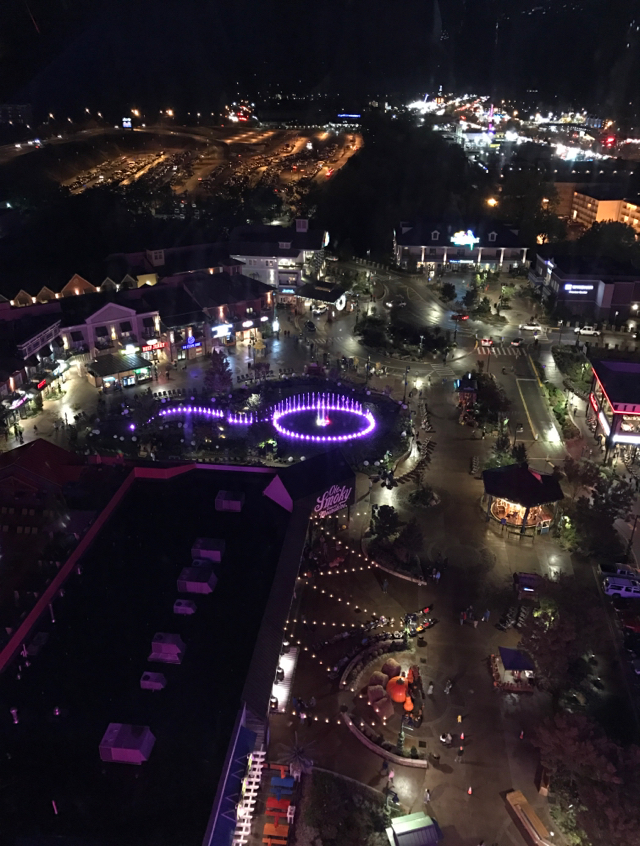 There was a dancing colorful fountain show performing to music. Very pretty. 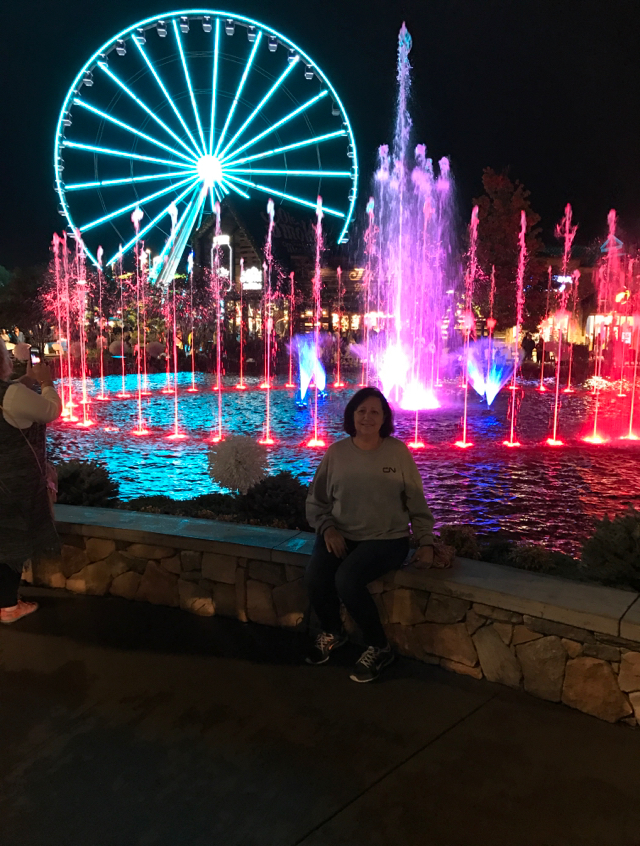 So we ate. Walked the shops. And I rode a ride or two.  Then we took the trolley back. And settled in for a chilly night with the Poochie Dog as she so patiently waits for our return to the camper. I don't know if she barks or howls or creates a scene while we gone. Hope not. 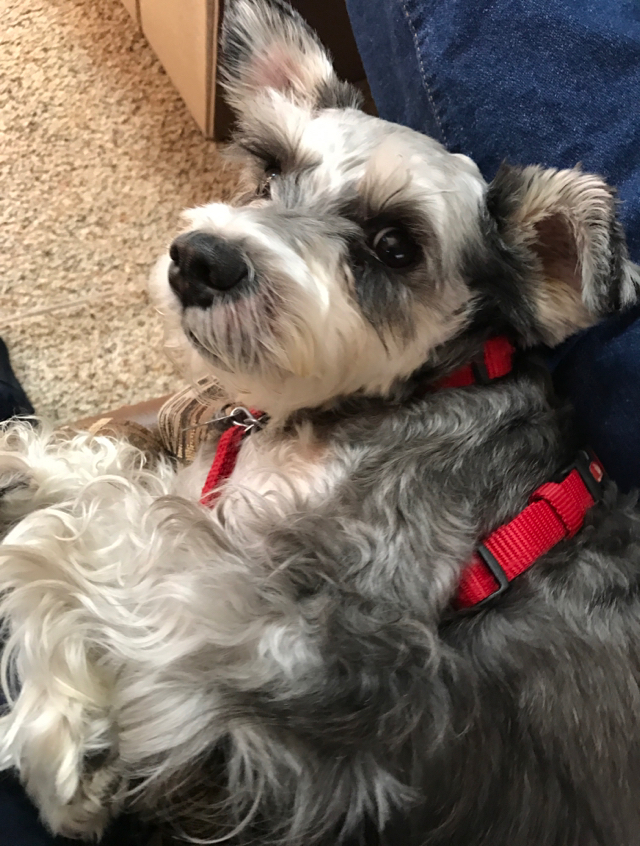 A birthday for another four year old provided kids and adults with food, cake and gifts on a beautiful autumn day.

A princess cake and cup cakes.
Read more »
Posted by gin at 11:13 AM No comments:

Not The Fair-est Of All

October brings fairs and festivals, Ferris Wheels and rides, the Midway, fair food, agrculture and livestock, and such, which I love and have attended my entire life. 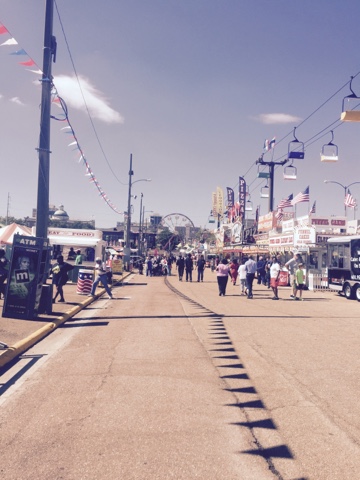 So we went to one on a Thursday mid-day. Being a school day, it wasn't crowded in the least.  That's me in the center in the pink shirt. 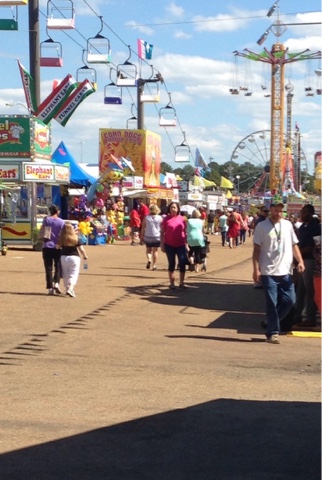 BUT. The rides didnt operate until 4pm. So I didn't get to ride the Ferris Wheel which was my whole intention of going. 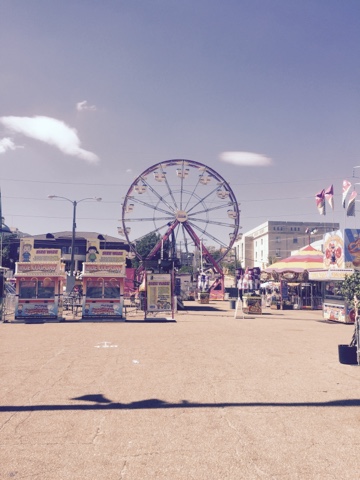 A bigger BUT was not all the livestock was entered. It was only day 2 of a 10 day fair so I guess we were a bit early. They weren't too interested in a picture with me. 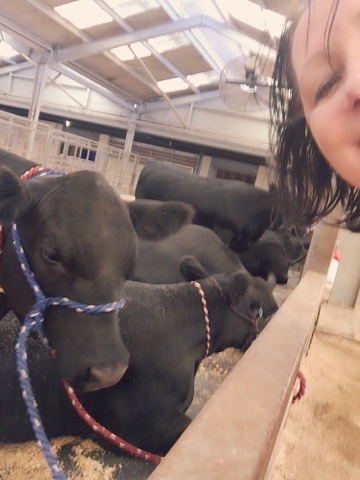 Maybe I just remember the way it was. And not that I'm older and it's different.
Posted by gin at 7:19 PM 1 comment: