This week is DIY. Random things keep getting my attention from random sources.
This is adorable, seems super easy, and I don't know the source it's from. 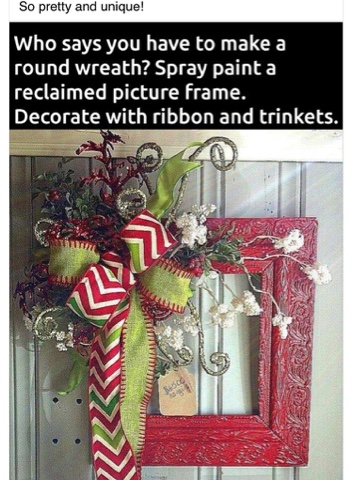 Simple instructions. Let me know if you make one.
Posted by gin at 7:05 AM 1 comment:

If you’ve been around pinterest much lately, you’ve probably seen this glittery snowball tutorial by Martha Stewart. I thought it looked like a friendly enough little project, until I checked out the comments. Everyone says stay far away from this project! It doesn’t work! The balloons will stick! The balls will collapse, bringing your sanity and self-esteem crashing down upon you!

So I thought: that looks like something I should try.

Since the tutorial doesn’t offer any pictures, I took some along the way to show you how it worked for me. Here’s what I used:

I don’t know why their heads are chopped off. Sorry about that.

Step 1: Pour a little tacky glue in a bowl and water it down.

Here’s my bowl with just glue, then with water too so you can get an idea of proportions. I ended up using lots more water as the project progressed… mostly because I was running out of glue… but it worked both ways.

Step 2: Blow up your water balloons

Not too big, and don’t leave your pack of water balloons laying out on the living room floor so your 21-month-old finds them, then later you think you MIGHT have seen him swallow something, so you rush to the emergency room and spend 2.5 hours there until midnight last night getting his chest x-rayed because you thought you heard a weird cough coming out of him. Wait, did this just turn personal? Yes, I’d like to erase last night. Hide your water balloons.

Tie the end of the string onto the end of your balloon, and just start going wild. We are going WILD in this craft time.

I dunked the balloon in my glue bowl and rolled it around until it was covered. I didn’t even attach the end of the string to the balloon in any way – just used the glue to hold it on. This step is gonna get messy and gluey. RELISH it.

This is where you’re getting your money’s worth with this post: add the glitter right now, before you hang it to try. Don’t listen to Martha, bless her little heart. Just pour the glitter on your balloon over a bowl until it’s covered in shiny Christmasy delight.

I attached a little twist tie to the end of my balloon, then hung the twist tie from a piece of string on a dowel. Martha recommends using a clothespin “threaded on a dowel that you’ve suspended from two points.” You can try that too. But this way, you can use your shower rod or whatev.

Now DON’T TOUCH IT for at least 24 hours. I waited longer than that because I’m an incredibly, patient diligent crafter I got really busy, then procrastinated. Update: based on a recent comment, leaving them up to 48 hours might be the key to making them dry correctly and not stick. So I recommend procrastination.

Step 7: Remove the balloon and hang.

I’m so excited for you when you get to this step! It’s intensely satisfying. You stick a pair of tweezers in a hole and pop the balloon, then it makes this amazing crinkly sound while it slowly pulls away from the sides of the string and withers into a sad little balloon mess in the middle of your snowball. Fantastic.

(Quick tip: Try this with one or two snowballs before you dive into making a hundred. Some people said their string stuck to their balloon, but spraying it with Pam helped fix the problem. That didn’t happen to me, and hopefully it won’t to you either.)

Remove the balloon pieces with a pair of tweezers and try not to jump up and down with excitement. Insert an ornament hook on one of the string pieces to hang.

I brought in some branches from the yard, displayed them in a vase and hung my snowy balls from the branches. I think they’d also look amazing on a Christmas tree.

This was a fun little project to get into some wintry craftiness. Have you been getting crafty lately? Had any tutorials fail on you?

I was so excited when I saw this that I just copied and pasted the whole thing with ads and all so I would have a place to refer back to it (on my blog) when I get ready to DIY it. Again here's the site  http://www.viewalongtheway.com/2011/12/glittery-snowball-tutorial/