A quilt in a week

One summer day a quilt was started. I needed something to do. I rummaged thru my fabric stash to see what I could pull together to make a simple quick quilt. There before me were pinks and greens and whites, with flowers and geometric shapes and carousel horses.

Large triangles cut to make diamond blocks became my vision. Fussy cutting the carousel horses to be sure there were no heads or legs or tails missing for the most part.
It was harder than it seemed to layout the design so each triangle was set the correct way. It took two days to cut, layout, and sew the triangles together to create the quilt top. 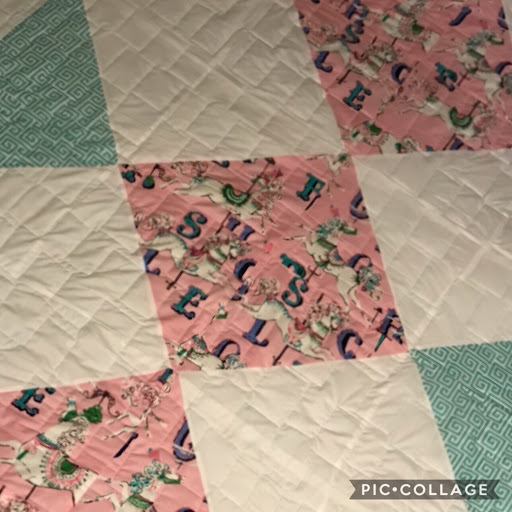 Day 4 was time for the batting and the backing of which I had none. A trip to Hobby Lobby solved that dilemma. Then the quilt sandwich was made. Top, batting, and backing. (Kinda like a PB&J sandwich). And aligned on the quilting frame,

The next 2 days and nights, in my spare time, was spent machine quilting it and then binding the edges. 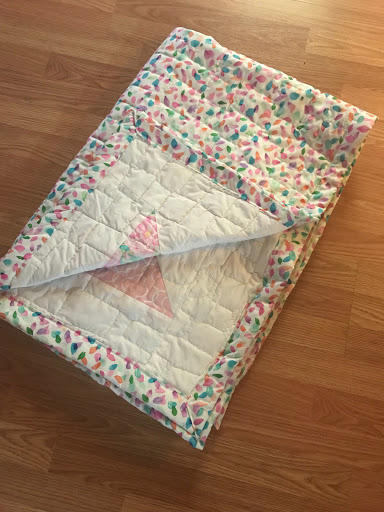 The finished size 68” x 76” will make a nice twin size quilt and snuggly cover for a girl. I have a boys theme quilt in mind next, cause everyone needs a quilt.

That’s a wrap on a quilt in a week. 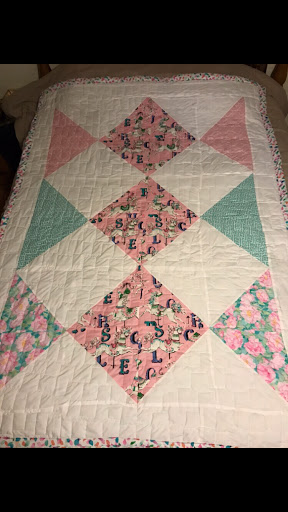 Summer with then MawMaw, (again)

My summer gig was spent with my little grands Monday thru Friday, 8-5, filled with all things a grandmother would allow and a parent wouldn’t. Yes. You read that right. Yes. The parents were in shock more than once during the summer. Yet, the parents have conveniently forgotten how they acted in their younger years. So, just to hit the highlights of our summer days together:
Must make your bed before grandma lets you get away with murder. I am one of those who must make my bed every morning. My rule for the grands was we must make our beds first. The 4, 5, and 6 year olds became masters at bed making. Though it included standing up in the bed to fly the covers up and let them land on the bed 59 times to get it right.
I’m a stickler for sticking to schedule. We had to have breakfast by 8am. Because there was lunch at 12 and snack at 3 and parents were home by 6 and dinner by 7. And I was hungry at 8am so that was a good reason, too.
Why, yes, we can play ball in the house. Our summer was in excess of 100 degrees everyday. So unless we were playing in water outside, we stayed inside. With a small spongy nerf ball or a tiny McDonalds Happy Meal stuffed animal we played soccer or baseball in the living room. Proud to say not one thing got broken. But just so you know, their parents played ball in the house and did break a thing or two when they were younger and I was not home.
Mawmaw loves craft time. And so do the little ones. Especially if you let them use glitter glue, scissors, stickers, markers and not colors. I spent a lot of time defending why hair and floor and everything had shiny stuff on it to the parents.
Who doesn’t play hide and seek in the house? This has to be every kids favorite game involving running thru the house, screaming, and getting into places you weren’t ever allowed - like behind the drapes. We did occasionally do quite puzzles on the floor, board games, and I spy.
An hour a day was given to quiet time. The little ones spent their quiet time on their iPad. My quiet time was spent repeating “turn that down.” With 3 Ipad’s going it was getting a little loud.
Miscellaneous time. Two VBS weeks scheduled at 2 different churches. A day or two was spent at the movies. Looked forward to the pizza delivery guy a lot. Plenty of wet towels and wet swimsuits stacked up from water time in the hot sun with a slip and slide, a next neighbor who so graciously invited us over to her pool with her grandchildren, and making our own water slide with the hosepipe gushing down the swingset slide. A week they were all gone on their family vacations.
Then summer was over and school time came. 1st grade. Kindergarten. And Pre-K4. What’s a mawmaw to do now?